Al_is_on
Sydney, Australia
My musings and meanderings on childhood - mine juxtaposed with that of my kids'. Everyday incidents and images from our life in Sydney turn my thoughts towards my own wonder years growing up in Bandra, Bombay, India.

Took C1 and C2 to, what they call, the “Bike Park” today. This piece of turf has a purpose-built cycle path for our wee ones to learn to use their tricycles/scooters/bicycles safely. With two click-clacks of their helmets, they were off!
﻿
They say you never forget how to ride a bicycle. To that I’ll add: you never forget your first cycle.

I got my first bicycle when I was around five years old. It was a hand-me-down from my older cousins, so Dad gave it a fresh lick of paint. (I have no idea why he chose black! The saving grace was the pink seat.) Training wheels attached, Dad began Cycling 101 classes at the start of the summer holidays. Holding onto the back of the seat, he first walked, then trotted, then jogged, then ran beside me as I progressed with my pedalling. 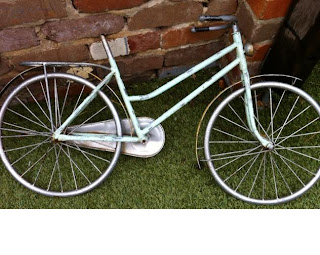 So picture this:
The stifling May heat has made way for June who makes a grand entrance with claps of thunder for applause. It’s the monsoon season in Bombay. The roads are slick with rain. I’m gripped with cycling fever; I want to cycle morning, noon and night. Dad takes off the training wheels but still holds onto me for good measure. I’m proud as punch.
I’m dressed up in a pretty frock (perhaps, we were going to visit an aunt) but I want to take my bike out for a spin.
“Dad, you’re holding on, right?” I call out to my father who is running to keep pace.
“Don’t worry,” he answers.
I’m flying...
Then I make the mistake of turning back. Dad is distant speck a good 30 metres behind me.
I’ve been cycling by myself.
Excitement! Elation!! Ecstasy!!!
Then, crippling fear...
I crash straight into a pile of chikkal (muck) right in front of Nana’s front steps.
My dress – and ego – in tatters.


But in the Bombay of my childhood, a bicycle, as the song goes, was built for two.
It was the perfect mode of transport for courting couples before they moved up a gear to Vespas, Lambrettas and Enfields. The pair went “doubles” – the lissome lass sat side-saddle on the cross bar while her roving Romeo pedalled her across town, breathing in the scent of her freshly-shampooed hair. No helmets, no worries!
Emboldened, he would lean in to nuzzle the sweet spot behind her delicate neck. But that’s as far as the PDAs went, just in case Gertie, the neighbourhood goss, told Old Joe who told Virginia-aunty who told Mrs. Baptista that she saw Michael on the cycle kiss Tulip on her two lips!

﻿
So tell me, do you remember your first cycle? Who taught you to ride? Did you have training wheels? And what’s your opinion on PDAs (public displays of affection)?